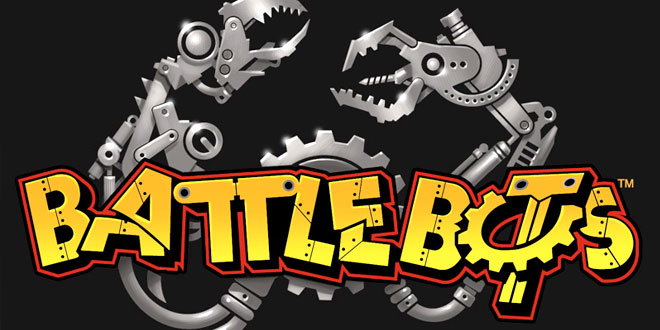 Competitive robot combat has been a recent phenomenon where people get together to form teams and make robots for fighting purposes. Many robot combat leagues have come and gone, but the one that stands out the most has been Battlebots. Originally airing on Comedy Central, and now shown on ABC, Battlebots is a popular competition for friends and family alike. Milton Bradley caught on to this initial popularity boom in 2001 by publishing a board game dedicated to Battlebots.

Battlebots is nicknamed the “Kickbot Arena Game” and it was designed for players of ages 8 and up. The battles that take place on this Arena Floor are driven by simulations via dice rolls. The player who has the better rolls will win.

To win in Battlebots, one must capture all of his or her opponent’s Battlebots through multiple battles.

Before the chaotic robotic battle begins both players must determine which Battlebots will make up their teams. The youngest player goes first by picking one Battlebot Card. The opponent then does the same. Both players then take turns picking cards until teams of at least 5 bots have been formed. All other Battlebot Cards are placed face down and out of play. Keep in mind that neither player will be allowed to have more than 5 bots on his or her team at any time.

Once teams are formed numerous rounds of battle will occur. Both players choose one Battlebot Card from their team and slide it bot-side up halfway through the Arena Wall slot onto the Red or Blue Entry Square. The youngest player always starts the round.

When picking which Battlebot Card to do battle with, players can observe their cards to see what kind of stats they have. For example, one card to play would be the Battlebot named “Doall”. The stats for Doall are 2 red or blue and 1 yellow or green. These stats indicate which dice you will get to roll for Doall. However, some bots only have 2 squares colored in for their stats, which means that you will only get to roll 2 dice instead of 3.

Both players will have to watch out for the Trap Doors that are located in all 4 Arena Floor corners. If dice are rolled into these Trap Doors, they will fall below the Arena Floor and will be eliminated from play for a battle. A strategic note for the player who rolls 2nd in a battle is that he or she can intentionally aim at knocking the 1st player’s dice into the Trap Doors or flip them onto a different side.

Located on 2 corners of the Arena Floor are 2 purple rectangles which represent Pulverizer Zones. Any dice that land on, touching or knocked into these zones will activate the big Pulverizer Hammer hazard. When this happens immediately pause the battle. The opponent of the player whose dice are on the zones take the one silver Pulverizer Die and have only one chance of launching it at any dice, to flip them or send them down through a Trap Door.

All battles in this game depend on the roll of the dice. When a player’s bot loses all of its available Battle Dice (as shown in its stats), it is captured by the opponent, and the opponent will have the option of either discarding this Battlebot Card or adding it to his or her team while discarding one Battlebot Card that is already on that player’s team. A bot that previously won a battle can do battle again immediately or can be saved for a future battle.

There are a few variants that can be played, including the Short Game where players will agree to battle under a specific time limit. There is also Tournament Play where all 24 Battlebot Cards will be used in a single elimination tournament, and only one bot will remain standing as the winner of the Silver Nut. Finally there is the Extended Game where teams of 5 bots are formed at first, and then both players will get to use 7 more cards each to have a complete contest. The player who runs out of 5 cards first will be the first to choose which next bots to have.

When I was younger in the early 2000’s I would play this game with my family very often, and I remember having such a fun time playing. My only request for a game like this would be to have more Battlebot Cards available. Perhaps if 36 to 48 different Battlebots were available that may have extended the ability to replay this game even more. As it is, though, Battlebots is a fun game that boils down to who has the better dice roll, and that simple concept carries this game to becoming a great game for the family to have.

Dominion, Build your Empire with this Card Game 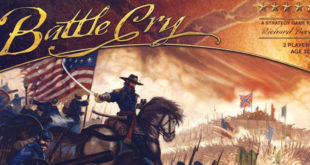