A board game that involves more strategy than what is on the surface, Ticket to Ride is an appealing game that can be played within 1 hour. Ticket to Ride contains a ton of depth but isn’t too complicated for players to learn. Well thought out choices must be made to get the best possible result on the board.

Ticket to Ride can be played by 2 to 5 players, ages 8 and up. 240 plastic train cars, 144 cards, 5 wooden scoring markers and the game board itself make up all the equipment. To begin play each player receives 3 Goal Cards, cards that list 2 cities that the player will attempt to connect in a route. Examples include Houston to Pittsburgh, Oklahoma City to Las Vegas, Montreal to Raleigh, and so on. 2 of these 3 Goal Cards must be kept at all times, but a player can keep all 3 if he or she wishes.

Players are then dealt 4 Train Cards which contain different colors. On his or her turn, a player can either draw 2 more Train Cards, or play a set of cards that matches a line on the game board and then start building train cars on that line. For each line that is built points will be won, and longer lines will be worth more points than shorter lines. Alternatively on your turn you can draw 3 new Goal Cards and you must keep at least 1 of them. Play continues until one player had less than 3 train cars remaining in his or her inventory. When this happens one more turn is played by each player and then the final scores are counted.

How to Win Ticket to Ride

The objective in Ticket to Ride is simple. Whoever scores the most positive points at the end of the game will be the winner.

Draw as many cards as you can, even if it’s early in the game. You will need to plan out your routes without telegraphing your intentions to your opponents. You might want to draw several rounds worth of cards to see what color train options will be available for you before you put down any track. Drawing cards should be your default option to use if you are unsure of what to do on a turn. Study all the routes on the board and ask yourself one question. Which colors do you need?

Your opponents are always drawing cards, but they are also discarding as well. What are they discarding? Once an opponent lets go of these color Train Cards, they will return to form a new reshuffled deck. Knowing which color Train Cards are available could become critical in whether or not you can build tracks for your route, and utilizing the gray routes along the center of the board would help in this case.

Make sure that you get these wild cards because they will give you the flexibility you need in completing your routes. Locomotive Wild Cards can be played along with cards of the color that you choose. However, be aware of the fact that if you draw one of these special cards your turn will effectively end.

Previous Cash ‘n Guns, Play as Gangsters Splitting the loot
Next Amerigo, Become the Best Explorer in The Land

Pandemic Board Game, Prevent an Outbreak 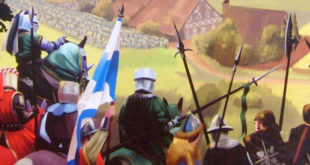 Dominion, Build your Empire with this Card Game

A board game based on the act of forming the board of play with tiles, …